A Man’s Guide to Quitting Sugar: Part 2 – The Problem with Sugar

“Sometimes we struggle through a tasteless coffee till the last sip, then we find sugar lying at the bottom. That’s life, sweetened but not stirred well.” – Unknown

Let’s get one thing straight: Sugar is not evil! The current health and nutrition culture treats sugar as if the world has been unknowingly putting belladonna on their corn flakes. While the sugar most westerners consume is devoid of any vitamins and minerals, it’s not necessarily a bad thing. However, our overconsumption of it, the addictive qualities of processed sugar, and the effects on testosterone and cyclical effects on weight and health, are all things we need to be concerned about.

Note: As mentioned in Part 1 of this series, much of what is being discussed about sugar can be used for any type of food addiction. In this article we’ll talk about the particular qualities of sugar that lead to addictive behavior, though many highly processed foods have similar characteristics.

A Brief History of Sugar

I find it interesting that sugar has been available for the longest period to the people of India and Asia, both cultures we would not equate with obesity, rather, just the opposite. Originating in India, cane sugar was not processed into dry, crystalized sugar until around 350AD though it had been enjoyed by Indians for millennia prior. It eventually made its way to Asia and then to Africa where it was discovered by Muslim invaders. Europeans discovered sugar when they fought the Muslims in the Crusades, around 1100AD.

While the process for making dry, shippable sugar had improved, it was still expensive due to the limited number of regions it would grow. With the discovery of the new world by Europeans, along with a vast array of islands, came new areas to grow cane. Slave labor and the abundance of growing area drove down the price and it soon became more affordable, though it was considered a luxury item and was used sparingly until the industrial revolution.

Before too long, it was finding its way into everyday meals, and as the availability of sugar widened, so did the consumption of candies and soft drinks, and so did our waistlines.

Stephan Guyenet of Whole Health Source created a graph which shows the average pounds of sugar consumption per-person, per-year since 1822. I don’t know how the data was obtained or anything about his site, but I have seen similar data on other sites, just not in graph form. 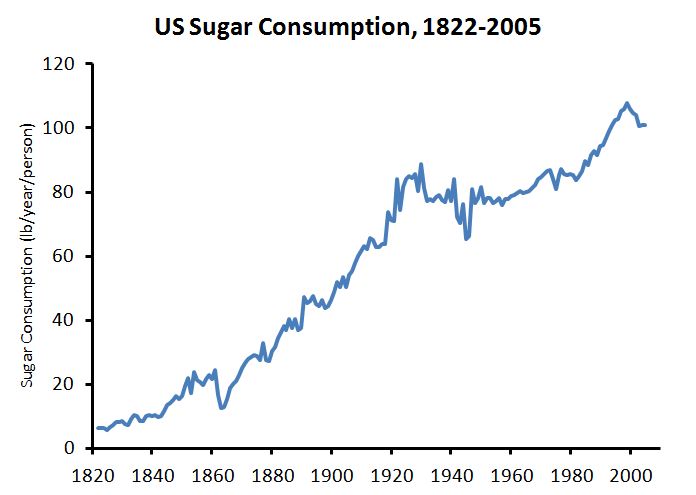 Sugar consumption in the US since 1822 by Whole Health Source

Forbes also has a really cool infographic on sugar with a ton information. Check it out here or by clicking the image below. Sugar consumption according to Forbes.
Click the link to see the full sugar infographic.

Why a Man Should Care About Sugar

OK, we get the idea; we eat a lot of sugar. This isn’t something entirely new to most people. However, we may not understand the negative implications on us as men and how we need to change our mindset towards it. Here is a quick run-down of the problems associated with sugar overconsumption.

I’m always leery of using any “scientific” data in an article because the findings are subject to change. That being said, studies have shown a decrease in T-levels after the consumption of sugar. Regardless, I know most men see low-T symptoms when they are on a high-sugar diet:

In other words, too much sugar makes you fat which indirectly decreases testosterone. There are a number of studies which show the link between obesity and low-T, though the exact reason is still a mystery.

Excess sugar is stored as fat. What is considered excess? More than what your body thinks it needs for a given task. If your body needs the quick energy which sugar provides, it will go to the muscles and be used. If not, which is most cases, it is stored as fat.

Eating additional sugar every once in a while is alright assuming you have a healthy and active lifestyle. You will eventually burn through the extra fat. The problem comes in when you consume more sugar than you will ever be able to burn through, thus, you gain weight.

Sugar Can Cause Mood-Swings, Lethargy, and Depression

When we eat something sweet the reward centers of the brain are activated as the levels of dopamine, a feel-good hormone, is increased. You may have seen research which compares this to cocaine and other drug addictions, which is true, but the same thing occurs when you exercise or have sex.

The release of dopamine does not equate addiction, though the repeated release of this hormone begins to set a new baseline for what your body believes is normal. It’s like driving a McLaren for a year on the Autobahn and then trading it in for a Camry in the suburbs. Everything feels slow and lethargic in comparison until you adjust. The same thing happens with sugar, drugs, sex, and even exercise when done to excess.

After a day of sugar-filled lattes, granola bars (yes, granola bars), and cookies, you crash when you get home, and try to please the reward centers of your brain by eating other foods, gaming, watching a movie, or some over-stimulating, yet generally lethargic, activity.

What is nutrition-robbed food? Usually this is processed foods which have been stripped of vitamins for greater shelf life or other commercial reasons not intended to benefit the consumer. Sugar (and\or other flavor enhancers and a mound of sodium), along with vitamins, are then added to the food to make it palatable and to light up those reward centers of the brain, which is great for repeat business.

This means that much of the “natural” food we consume is actually fairly doctored with sugar and sodium; both natural substances. It also means that when we thought we were buying life-giving sustenance we were actually getting a product void of the kind of nutrition that leads to health.

Fellas, when you begin looking at the food available to you in the grocery store and see how little of it is actually quality, a certain sense of disgust will overcome you. That, I believe, is when things will start to change for you!

The next two articles will focus on identifying if and why you are a sugar addict and how to put sugar back in its proper place. Stay tuned!